There was an error retrieving images from Instagram. An attempt will be remade in a few minutes.

Well, I am totally lost my words. Maggie Rogers definitely one of the best musician that I ever known. Last Tuesday, she shared a picture of her handwritten letter on Instagram and told us that she will released her brand new song, Split Stones. This song was released as a gift for all her fans who already make her ‘sang louder’ and ‘dance harder’. So, Split Stones might be her last single for a while and this is absolutely a great and wonderful single. 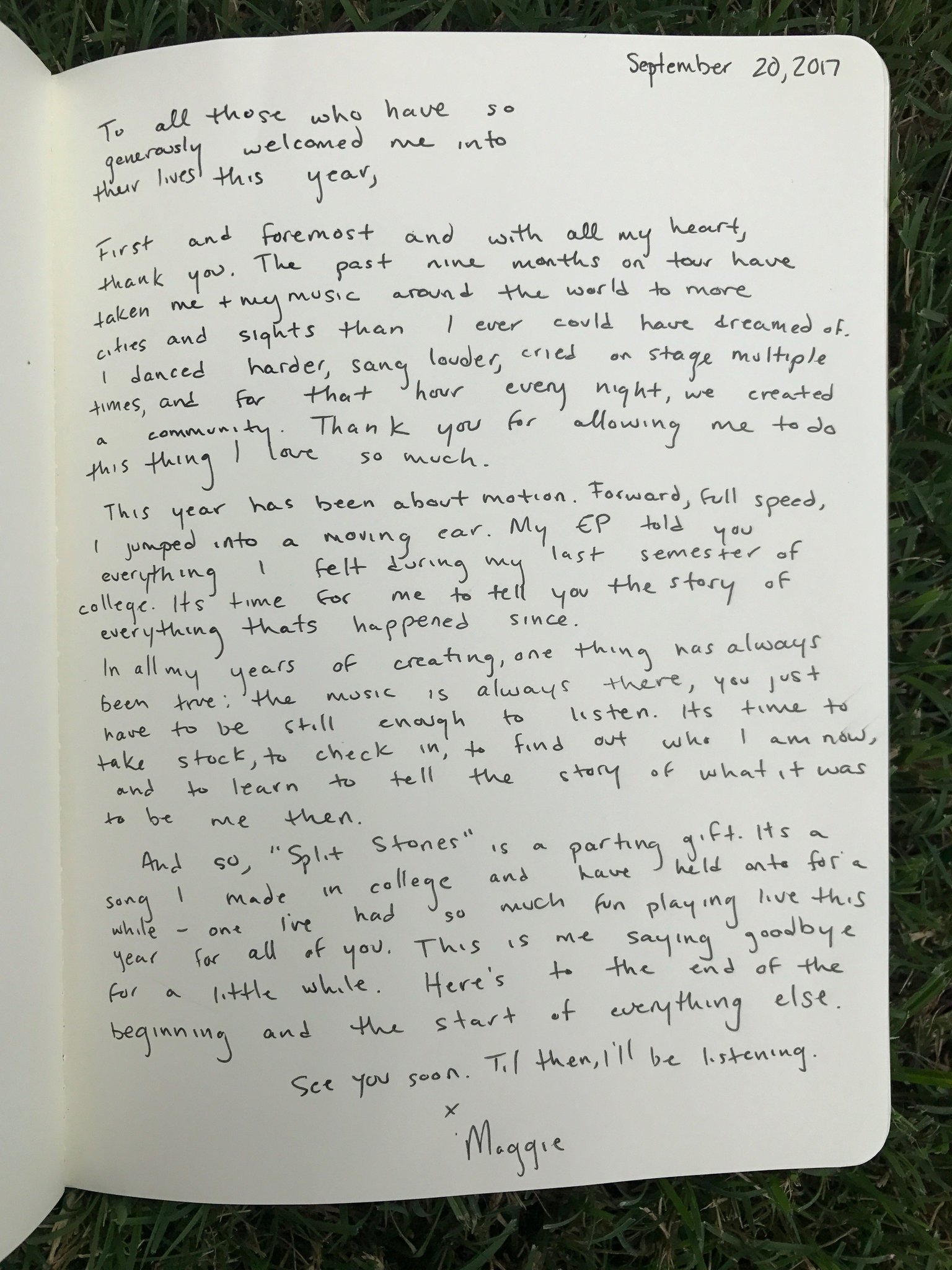 “‘Split Stones’ is a parting gift. This is me saying goodbye for a little while. Here’s to the end of the beginning and the start of everything else.” – Maggie Rogers-

For me, Split Stones already become our song of the month. This song is absolutely awesome and I can’t stop listening since it first released until now.  All I can say, this song is so ‘Maggie Rogers’. Still with R&B and electronic melodies, but this time she add the sound of glass, banjo play, and other nature and earth sound elements which makes everything so perfect to hear and dance. Plus, Maggie Rogers’ smooth and beautiful vocals absolutely fit with the melodies. What a perfect song. Absolutely perfect.

Somehow, Maggie Rogers never failed to amazed me since the first time she introduced us to her debut single Alaska until her awesome debut EP Now That The Light Is Fading. Everything she creates absolutely wonderful. All I can say is thank you so much Maggie Rogers for this absolutely wonderful gift for all of your fans around the world. Definitely can’t wait to hear new things from her.

For you who haven’t heard Split Stones, I think you have to, really have to hear this song and I bet you will falling in love with this song since the intro. Just click the Spotify below and don’t forget to share your thoughts and opinion about this song by give a comment in our blog. We will so happy to give a response for each comment. Thank you for visiting Kustosica.

Our most anticipated singer for this month is a wonderful singer-songwriter from New Zealand, Em-Haley Walker or also known as Theia. I accidentally found and heard her awesome music through Spotify and I falling in love with one of her song called Roam at the first hear. Then, I curious to hear another music from her and I found out that she just released her self-titled debut EP last June. After hear the EP then I’m really sure she’ll become one of the most anticipated singer.

Theia has her own music characteristic that makes people can’t stop listened her music over and over again. The result from the combination between dream pop and R & B is addicting and infectious melodies who become a great pleasure for all of you who listen her music. Plus, Theia’s smooth and beautiful voice become one of the main attraction from her music. Definitely something really good to hear.

For you who haven’t heard Theia’s music, I suggest you to push the play button below and hear one of her song called Roam. I bet you will falling in love with her music too. Don’t forget to share your thoughts and opinion about this song by give a comment in our blog. Thank you folks. Hope you like this article and thank you for already visiting Kustosica.

My first encounter with Rationale is through Bastille’s mixtape VS (Other People Heartache Pt. III). He is one of the featuring musicians in the album. Together with Tyde and Bastille, they work for the song called Axe To Grind. The first thing that stolen my attention is his smooth and rich of R&B voice. My curiosity grew bigger as Dan Smith, Bastille’s front man, diligently talking and promoting Rationale’s music. So I began to dig, what’s Rationale’s music like. And, I should have said before that I should not doubt Smith’s taste of music to begin with because Rationale is a promising musicians that I won’t doubt will grow bigger soon.

OUR MOST ANTICIPATED ARTIST: RATIONALE

Rationale is a project and a stage name of Tinashe Fazakerley, a Zimbabwe-born British singer songwriter. People describe his music genre as alternative pop, R&B, and synthpop, but, for me, what makes his music stand up is his signature in his music, which is his voice and his talent in putting details in songs. Once you’ve listen to Rationale’s music, you’ll know it’s his music when you hear new music from him. It’s recognizable. Tinashe his self already jump into music industry years before. He once released an album under his former stage name Tinashé; he’d work with Mark Crew–also knows as Bastille’s producer, he also become a songwriter for other’s artist like Rag ‘N’ Bone Man. But the name of Rationale slowly soar in when he released his EP, called Fuel to the Fire in 2015.

The EP contains of 4 easy listening songs, Fast Lane, Re.Up, Fuel to the Fire, and The Mire. His smooth, calming, relaxing, yet full of emotion voice is on point. I bet, you can’t help yourself joining him to sing along–try to listen to The Mire. You’ll also find yourself swing along with the music when you listen to this EP, especially for Fast Lane and Re.Up. Besides his amazing voice, the details in every song, like the stand up melody between the verse 1 and two or the swinging humming in the background, surely mesmerizing and making me want to keep listening the EP over and over again.

I really looking forward to the day he will release his LP, which thankfully has been planed to release in September this year. Rationale already teased the excited fans with his two new singles Something For Nothing and Palms. If you haven’t heard of his music, this is the right time to check his music and catch up with our most anticipated artist. Here, take a listen to Rationale’s EP and let’s anticipate his LP together this September 🙂